The folks at WatchND have created another awesome video for Notre Dame football fans to watch during the near nationwide shutdown.  This time they’ve come up with a list of the top 10 clutch touchdown catches in Notre Dame football history, and they dug deep into the archives for some of them.

Give the video a watch, but here’s the rundown of how they ranked them. Also, if you missed their review of the top 10 catches by a tight end in program history, be sure to check that one out too.

Wow, what a job by the folks at WatchND on this one.  They mixed in some recent greats like Fuller’s UVA game heroics and Miles Boykin’s insane one-handed versus LSU in with some real classics.  They even dipped way back into the archives for a clip from 1935.

I still remember watching the Quinn to Samardzija game-winner against UCLA at the bar during my sister’s wedding.  Mom was NOT happy with me, but I came running back into the reception hall area with my arms extended, signaling the Irish touchdown.  In my defense, my sister did decide to get married during football season during a game I had tickets to initially none the less.

I was lucky enough to be in the stands of Scott Stadium to see Fuller haul in Kizer’s heave as time was ticking down.  Easily the most thrilling game ending I’ve ever seen on the road.

The Jay Johnson touchdown catch was an interesting inclusion that might raise some eyebrows, but remember that at the time, Notre Dame was still in the midst of their record winning streak over Navy at the time.  Without it, that streak ends right there in 1999.  Who knows, maybe Bob Davie never gets the 2000 season to rebound if he loses that game too.

We might even have an old article from that game on an old hard drive; we can dig up to see what we were saying that day.  I’ll do some digging.

Can’t wait to see what WatchND has in store for us all next week.

Projecting Where Notre Dame's Julian Okwara Will Get Drafted 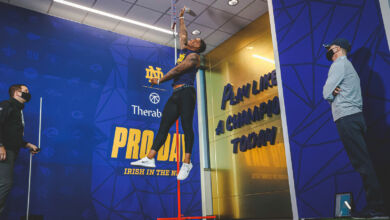 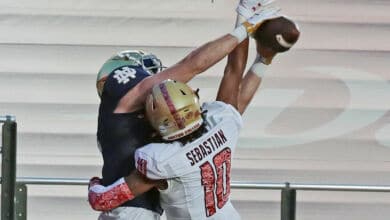 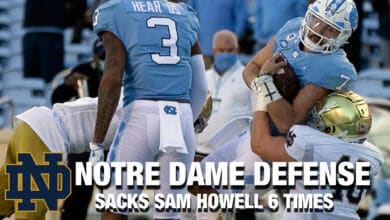