Notre Dame finally won its first game under new head coach Marcus Freeman on Saturday, besting Cal 24-17 despite their best efforts to let the Bears tie the game in the final minute. The Irish prevailed, however, giving them a chance to right the ship after a rocky start to the season though much work remains for Freeman, his staff, and this squad. Aside from winning the game, which is a significant positive after last week, there were some other positive signs mixed in with some continued concerns.

The defensive line was supposed to be a strength of the team this year, but thru the first two games, that didn’t materialize. However, it did on Saturday against Cal. Powered by the defensive line, the Irish racked up six sacks on the afternoon. All six were from defensive linemen. Jacob Lacey (2.0), Isaiah Foskey (1.5), Jayson Ademilola (1.5), Justin Ademilola (1.0).

For Lacey, it was a second coming-out party. Lacey had a monster game against Wisconsin last year but has been quiet since then. He hadn’t played much this season yet, either. But he played in a big way on Saturday with those two timely sacks.

It wasn’t a perfect game from the line, but it was by far their best. In the second quarter, Foskey had Cal quarterback Jack Plummer dead to rights for an easy sack but missed him. A few players later, Cal scored a touchdown. At the time, the miss loomed large but thankfully didn’t cost the Irish in the end.

Notre Dame also got injury scares to both Jayson Ademilola and Foskey, but both were thankfully able to return.

Another perceived strength of the team in the preseason was the offensive line. Unfortunately, like the defensive line, that strength wasn’t realized in the first two weeks. The OL didn’t quite have the coming out party the defensive line did, but it did show signs of life and looked better than it had all season long.

Notre Dame ran for 157 yards (without 10 lost yards for sacks) on 39 attempts on the day for an average of 4.02. Usually, that’s not anything to really celebrate over since it’s pretty average. After the little success Notre Dame had running against Ohio State and Marshall, though, it’s a significant step in the right direction.

After a shaky start protection-wise, the offensive line gave Pyne a pretty clean pocket most of the day.

However, the one glaring concern with the offensive line came in the form of three procedure penalties in the first half alone – all on third downs (WR Braden Lenzy added a fourth). That just can’t happen. Maybe some of it can be chalked up to a new quarterback and a new cadence. The Irish didn’t have one in the second half. Still, one maybe, but three all from the line?

Or at least I am assuming Rees went conservative with his play calling since after the missed seam route to Michael Mayer that spurred the now-viral clip of Rees yelling “Do your f-ing job!” to Drew Pyne, we didn’t see anything targetted more than 10 yards downfield all game other than the touchdown pass to Chris Tyree out of the backfield.

To call Pyne’s first start shaky would be generous. Pyne missed wide-open receivers from close distances and fumbled two snaps – one of which was lost – all by halftime. Perhaps he was too excited and couldn’t calm down – that does happen to first-time starters. Still, if this offense is going to do anything the rest of the season, Notre Dame has to be more vertical in its passing game.

Chris Tyree and Audric Estime led the Irish in receiving with 44 and 43 yards, respectively. It was great to see the backs involved in the passing game since they weren’t the first two weeks, but Notre Dame needs to get the ball to Mayer and Lorenzo Styles more than they did yesterday. Mayer had five catches for just 10 yards.

A win will always be better than a loss, even an ugly one. And this one was a relatively ugly win. However, Notre Dame has to play smarter if they want to salvage the season. The Lenzy false start came on a 3rd and inches that Notre Dame had converted on a quarterback sneak. Instead of a first down on their first drive, they punted after a three and out.

Notre Dame had the game won on a Clarence Lewis interception, the first Irish turnover of the season, but it got whipped away by a completely unnecessary targeting penalty on JD Bertrand. Bertrand, a captain on this team, went for a kill shot when the ball was already past the receiver and nearly cost his team the victory.

On the final play of the game, Brandon Joseph, a preseason All-American, tried to intercept Jack Plummer’s hail mary not once but twice instead of just knocking the ball down. Because of Joseph’s interception attempts, the ball got batted up in the air and nearly landed in the arms of a Cal receiver. Knocking the ball down there instead of trying to pad stats is fundamental.

There are a lot of fundamental issues that need to be cleaned up, still, and they’re not going to clean them all up in a week. So right now, Notre Dame just needs to do whatever it takes to get a win on the road next week against North Carolina to get to the bye and then figure out more of the long-term fixes.

We still don’t know a lot about this team

All we know right now is this team could scrap together a win against Cal, which is more than we learned last week after they couldn’t grind one out against Marshall. That might be a really low bar right now, but it’s still higher than it was a week ago.

We started to see this team play the kind of defense that we thought it would be capable of in August, but it’s still looking for that elusive first turnover, and the defense still let a let a quarterback not known for his legs burn then with scramble after scramble. Still, six sacks and finally seeing the defensive line come alive without needing a blitz is promising. The linebackers still need work, but Notre Dame finally has two of its three defensive units playing like we thought they could.

Offensively, this team is probably weeks away from finding an identity still. Will that cost them another loss in a game they could have won along the way? Maybe. We know Notre Dame wants to run the ball, and they finally did even though Cal knew it was coming. That’s a great sign, but averaging just over 4.0 yards a carry isn’t going to cut it every week. At some point, Pyne will have to let it rip downfield.

This team is still making a lot of execution mistakes. While the defense was better than it was a week ago, it should have been even better. Missed tackles continue to plague the defense. Clarence Lewis had Plummer dead to rights in the first half on a well-timed CB blitz but executed it poorly, allowing Plummer to spin out of it and turn a 10-yard loss into a long run. Lewis took an inside angle that gave Plummer the spin move. That’s just one play, but it’s indicative of many of the problems this team faces now.

Obviously, Notre Dame looked better on Saturday than they did against Marshall, but they will have to be much better next Saturday and then even better in three weeks against BYU. 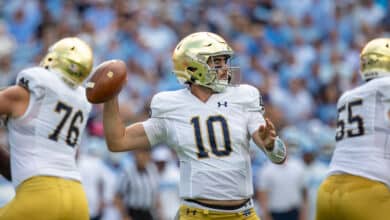 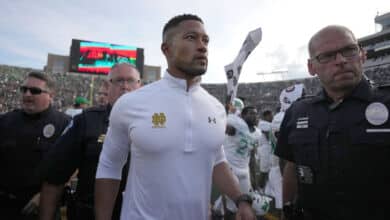 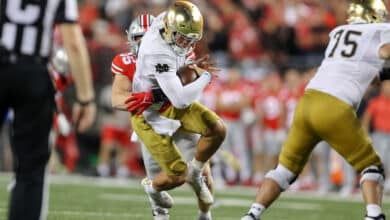