It wasn’t always pretty, but in the end, Notre Dame found a way to win again on Saturday in a 31-21 win over Northwestern.  The Irish opened the 4th quarter by taking a 17 point lead and looking like they were about to run away with it, before letting Northwestern back in the game and leading by just three.  A late Ian Book rushing touchdown, however, all but sealed the victory and pushed the Irish to 9-0 and one step closer to making the playoffs for the first time.

Ian Book had another 300+ yard effort with 343 on 22 of 43 passing with two touchdowns passing and a 3rd rushing.  Chase Claypool posted his firs t100 yard game of the season with 130 on 8 catches.  Tevon Coney and Daelin Hayes both posted 2.0 sacks (Hayes first two of the year) while Julian Okwara added a sack as well.

We’ll have more on this one though updates today may be delayed as UHND’s Frankie V is busy running the NYC Marathon this morning/afternoon.  We’ll have plenty to say on Notre Dame’s latest victory though.

Beyond the Boxscore: INside Notre Dame's Rollercoaster Ride vs. Northwestern 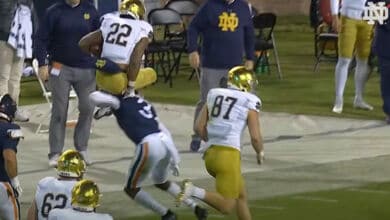