As Notre Dame secured their playoff spot under the bright lights of the LA Coliseum, their destination is still unknown. As conference championships approach, there are several storylines that will determine not only where the Irish play, but who they play. Will there be a rematch of the 2012 National Championship against Alabama, another battle against Dabo Swinney’s Clemson Tigers or perhaps a new opponent? It will all be settled this weekend.

Two Possible Locations for the Irish:

Notre Dame will either be headed to Dallas or Miami. The last time the Irish played at the Orange Bowl was against the Miami Hurricanes last season, and before that was the 2012 National Championship against Alabama. It’s fair to say that history has not been on Notre Dame’s side when it comes to the Orange Bowl.

As far as the Cotton Bowl, the Fighting Irish played at AT & T Stadium for the Shamrock Series Game in 2013. Brian Kelly coached the Irish to a victory over the Arizona State Sun Devils. However, the last time Notre Dame played in the actual “Cotton Bowl Game” was in 1993 when Lou Holtz beat the Texas A & M Aggies.

Unbeknownst to many fans across the country, the #1 seed in the College Football Playoffs determines where the semifinal rounds get played as the committee will not put the #1 seed at a geographic disadvantage. For instance, if Alabama is #1 and hypothetically plays #4 Oklahoma, they will probably play in the Orange Bowl in Miami given Oklahoma’s proximity to the Cotton Bowl in Dallas.

Can anyone beat Alabama?

Many Irish fans have memories of the 2012 National Championship Game with Alabama and fear the same result if they were to meet on the gridiron again. One thing is for certain, this Notre Dame Fighting Irish team is a more complete and well-rounded football team than in 2012.

However, Alabama is also light years ahead of where they were in 2012. Now that Nick Saban has followed the rest of college football and adopted the spread offense, the Crimson Tide appear unstoppable. Their best competition to date was the #10 LSU Tigers, who they beat on the road 29 to 0.

It’s important to see how the Crimson Tide play against the Bulldogs this Saturday. If Georgia can compete like they did in the National Championship Game last season, that is good news for the other teams in the playoffs. However, if Georgia is blown out by Alabama, that may set the precedent for the playoffs.

Storyline: A rematch of last year’s National Championship Game. The Bulldogs had a 13-0 lead at halftime and were shutting down the Alabama Offense. Nick Saban decided to bring in Tua Tagovailoa and the rest is history. Can Georgia slow down the Alabama Offense? This game will determine how many playoff spots are available to the rest of college football.

Storyline: Ohio State played their best game of the season last weekend against Michigan. It appears everyone has forgotten they were a missed pass by Maryland’s quarterback (on a 2-point conversion) away from having 2 losses. Nevertheless, the Buckeyes may have awoken.

Northwestern has a chance to face a Buckeye team that may be overlooking them and have the potential for a letdown game. Northwestern has already lost to Notre Dame and Michigan at home, it may take a miracle to beat Ohio State at a neutral site.

Storyline: The Red River Rivalry is back. This game will not take place at the Old Cotton Bowl, but AT & T Stadium. Oklahoma looks to get revenge after a 3-point loss to the Longhorns earlier this season. The Sooners are led by Heisman hopeful Kyler Murray. As Tom Herman attempts to sweep this season’s series for the Longhorns, expect a lot of points to be scored in this matchup.

Storyline: Clemson is an overwhelming favorite in the ACC Championship game against Pittsburgh. The Panthers were able to take Notre Dame to the wire earlier in the season by running and holding on to the football. But Clemson is one game from the Playoffs and have been getting better every week, I don’t expect this to be a close game.

Storyline: No USC or Stanford in the Pac-12 Title game. The storyline all season in the Pac-12 was Mike Leach and the Washington State Cougars. After Washington went into Pullman and beat them, they now have an opportunity to win their 2nd Pac-12 title in the last 3 years. Utah has also had a great season in their own regard. Although they aren’t playing for the College Football Playoffs this game will determine who represents the Pac-12 in the Rose Bowl.

The Notre Dame Fighting Irish are in the playoffs, no matter what “click bait” on the internet attempts to say otherwise. That leaves 3 playoff spots up for grabs. Certainly, I believe Clemson will take care of business against Pittsburgh, which will only leave two remaining spots.

I have Alabama beating Georgia in the SEC Championship Game, which will knock Georgia out and give Alabama the #1 overall seed. But if Georgia were able to beat the Crimson Tide, that would cause a lot of controversy around college football.

Nevertheless, I believe there is only 1 final playoff spot up for grabs. It comes down to Oklahoma and Ohio State. Yes, Ohio State looks impressive against Michigan, but they got blown out by Purdue and should have lost to Penn State as well as Maryland.

Since Oklahoma is sitting at #5 and they play #14 Texas this weekend, I don’t know how Ohio State can pass them up with a win against #21 Northwestern, but we’ll find out this Sunday when the final poll is released. 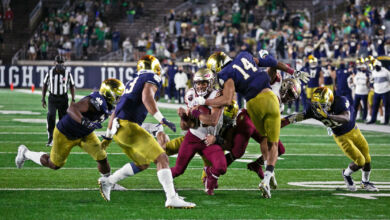