After an overtime thriller in Tallahassee, Brian Kelly and the Irish travel back home to take on the Toledo Rockets. Notre Dame was able to withstand a late surge from the Florida State Seminoles in week one and will look to have a complete game in week two. The Rockets may be out of the MAC, but Coach Kelly has already said they are the best MAC program he has faced in South Bend.

The current forecast for GameDay shows an 8% chance of rain with a high of 84 degrees and a low of 64.

Toledo Rockets will visit South Bend for the first time. Head Coach Jason Candle is entering his 6th full season for the Toledo Rockets. He holds a 39-21 for the program during his tenure. In 2017, Candle led his program to the MAC Title and won MAC Coach of the year. The Rockets have played in four bowl games under Jason Candle (In 2015, he was interim coach for their bowl appearance).

Duo of quarterbacks for Toledo. The Rockets are led by quarterbacks Carter Bradley and Dequan Finn. In week one, facing Norfolk State, Bradley went 8 for 12 with 183 passing yards and 1 passing touchdown. While Finn was more of a threat on the ground, with 9 rushing attempts for 82 yards and 1 rushing score.

It is likely both quarterbacks will see a lot of action in South Bend this weekend, especially after Notre Dame’s Defense struggled against a mobile quarterback last week.

Positives for the Notre Dame Offense. Jack Coan had a remarkable performance against the Seminoles. He went 26 for 35, with 366 passing yards, and 4 passing touchdowns. Yes, he did have an interception, but that was just a Hail Mary attempt at the end of regulation. Coan made several completions downfield and looked like a seasoned veteran all night.

Kyren Williams and Chris Tyree totaled 73 rushing yards, which they essentially gained on their own because the offensive line created almost no holes during the entire matchup. Through the air, Michael Mayer tallied 9 receptions while Kevin Austin Jr. added 4 key catches.

Negatives for the Irish Offense. The offensive line (for both teams) played dreadfully. Blake Fisher left the game early on and Michael Carmody had to step in unexpectedly. The entire line struggled to create any running lanes and allowed 4 sacks on Jack Coan.

I believe the offensive line will only get better in the next few weeks. Correll, Patterson, Madden, and Lugg all have experience and more potential than they showed. The rushing attack must step up against Toledo this Saturday.

How can the Defense improve in week two? Marcus Freeman’s unit was getting pressure on the quarterback the entire game (5 sacks), but for most of the game, the Florida State offensive production happened on a few plays. Then in the second half, “prevent defense” did not work for the Irish.

The unit has too much talent, even with a few linebackers injured, to be giving up 38-points to Florida State. I understand the Irish wanted to run clock late in the game, but it is difficult to get stops by rushing only three linemen.

Facing the Rockets, Notre Dame must continue to get pressure on the quarterback and force Toledo to beat the secondary downfield. Kyle Hamilton will create turnovers if Toledo is forced to throw the ball.

Notre Dame Offense vs. Toledo Defense: Jack Coan and the Irish were able to put up 41-points on the road in Tallahassee and they should have put up even more. I expect the rushing attack to gain momentum this week, and Coan will have more time in the pocket. Toledo only surrendered 10-points last week, however, that was against Norfolk State.

I give the Irish the advantage in this matchup.

Toledo Offense vs. Notre Dame Defense: The Rockets scored 49-points last Saturday and are expected to compete for a MAC championship. They will certainly take notes from the Florida State playbook, but it will be hard to move the ball against the Irish Defensive Line.

If Coach Freeman can limit the “chunk plays” this week, it will be challenging for Toledo to sustain long drives.

Notre Dame has the advantage in this department.

Special Teams: Toledo’s kicker, Thomas Cluckey, is 8 for 8 in his career. His longest make was a 41-yard attempt. Conversely, Jonathan Doerer is 2 for 2 this season and made one of the biggest field goals of his career against Florida State for a walk-off victory.

It is great to see Kyren Williams returning punts this season, and hopefully Chris Tyree will get some opportunities on kickoffs.

Yes, there were a lot of positives and negatives on both sides of the ball against Mike Norvell’s Seminoles, but the Irish are 1-0. I think only a handful of teams across the country could have come away with a victory in that atmosphere. After all, the last time Notre Dame won a national title they started the year with a 2-point win on the back of the kicker, Reggie Ho.

I am not saying the Irish will win a title, but close victories can lead to confidence the rest of the season. This weekend, the offensive line will not be facing a defensive front like Florida State, and I expect there to be a more balanced attack under offensive coordinator Tommy Rees.

Toledo will give the Irish their best shot, but Notre Dame will strive towards a complete game this time around.

ICON: Behind the Scenes & On the Sidelines of Notre Dame's Win Over FSU 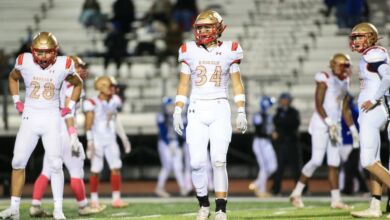 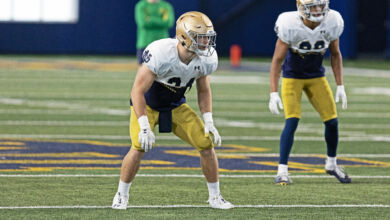 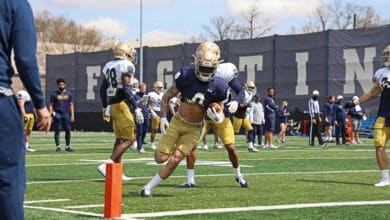